Handheld Bidet vs. Bidet Seat: Which One is Better for You?

Bidets are trendy now. But before you get on the bidet bandwagon, you have to figure out which type of bidet suits you best. When deciding between handheld bidets and bidet seats, you may feel overwhelmed as both of them are new to you. 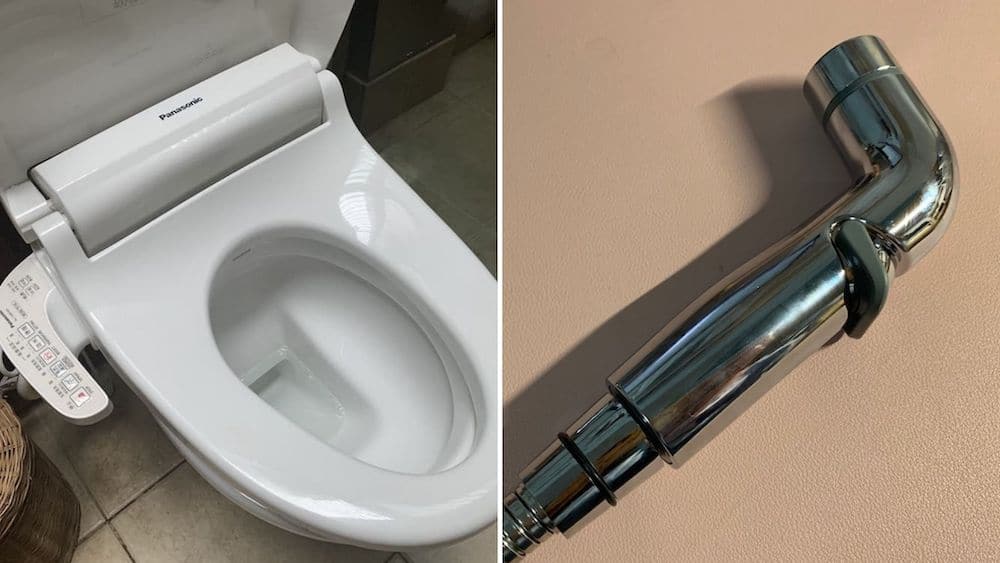 I got you covered. In this post, I will compare handheld bidet sprayers and bidet seats from different perspectives to help you figure out which one can fit you better.

If you have read the history of the bidet, you may have noticed that handheld bidets (also known as “bidet shower,” “bum gun,” or “bidet sprayer”) have been used by Muslim countries for a long time. You can still find them in the bathroom of these countries nowadays.

Electric bidet seats were invented in 1980 in Japan and have become more and more welcomed. More than 80% of Japanese households have an electric bidet installed, and people in other countries know them because of the luxury experience they bring to the users. Although Bidet seats have a shorter history, they spread very fast.

However, both of them don’t dominate the bathroom in the US yet, but I think they could in the near future.

All types of bidets work by making use of pressurized water. Nevertheless, electric bidet seats have far more features than handheld bidet sprayers.

With an electric bidet seat, you can get comfortable, warm water, a heated seat, various spray modes, a dryer, or even an auto-open and close lid. You will be able to adjust the nozzle position and store your preferences.

If you live in an icy area, I highly recommend getting an electric bidet seat as the cold water may freeze your butt off. Otherwise, a handheld bidet or non-electric bidet seat can still be a good choice because the unheated bidet water is generally comfortable.

Even though handheld bidets don’t have many features, they are more versatile than bidet seats. As bidet sprayers are not fixed on the toilet. You could use it to clean the shower wall, wash the toilet bowl, bathe the pets and wash the diapers. As long as it can reach the place, you can use it to clean anything you want.

In terms of universality, handheld bidets win this battle hands down as well. They are compatible with all the toilets, but bidet seats are not.

Some bidet seats are for round toilets, and the others are for elongated toilets. Things can get more complicated if you have a skirted or other types of toilets.

As you know, household water pressure is usually high. Therefore, the water stream props from the handheld bidet can be intense. It also applies to non-electric bidet seats. But you can constantly adjust it by turning the lever on the T-adaptor.

The water stream of electric bidet seats is gentler. The aerated water stream is effective in washing away waste but still makes you feel comfortable.

Some people prefer a stronger spray which may not be achievable for electric models but is not problematic for handheld bidets.

A handheld bidet sprayer is a budget-friendly option as you can get a nice one for around $30. It can last for a long time, and each part of a handheld bidet is easy and cheap to replace.

Non-electric bidets are often come with a bit higher price tag. A nice one usually ranges from $90 to $180. But it is still cheaper than electric bidet seats.

Most commonly, you can get a good electric bidet seat with various features at around $500. The price can get higher if you want a one with an auto open and close lid or night light.

Most electric bidet seats can last for years, but it could be costly if you want to ask a pro to fix it. In addition, it could increase your electricity bill somewhat.

You can install most types of bidets on your own. Installing a handheld bidet is very straightforward. Disconnect the toilet water line and install a T-adaptor to divert water to the sprayer and toilet. Then you can turn on the valve on the T-adaptor to get the handheld bidet work.

Installing a bidet seat can involve a few more steps. Except for installing the T-adaptor, you need to replace the old toilet seat with your new bidet seat. Beyond that, you should make sure there is an outlet nearby. If it is not available, you need to hire an electrician to get it done.

Handheld bidet sprayer vs. bidet seat: easy of use

Since handheld bidet sprayers don’t involve any extra features, you can start to use them by pressing the trigger on the sprayer head. However, you have to insert the sprayer head in the toilet bowl. To ensure the spray can aim at the right place, it will take a few trials and errors to find a perfect angle and gesture.

To use a non-electric bidet seat, all you need to do is wiggle around on the seat to let the water stream spray in the correct place.

There will be a short learning curve while using an electric bidet. You need to take some time to test every button on the remote control or side panel. In this way, you can find the best spray mode, nozzle position, and water temperature for yourself.

In short, you can get the hang of it very soon, no matter which one you will use.

Handheld bidet vs. bidet seat: which one is better for people with mobility issues

Bidet seats, especially electric bidet seats, are better for seniors and people with disabilities. With a handheld bidet, you will need to hold it manually with your hand and bend your arm to insert it into the toilet bowl, which could be a hassle.

With an electric bidet seat, you can sit on the seat and modify the settings according to a remote. Then the bidet will clean yourself automatically. I recommend you to get an electric model with a remote control instead of one with a side panel because you will not need to bend over and look down to access the buttons.

Get one with an auto-open and close lid and powerful dryer if you want to have a hand-free experience.

After comparing handheld bidets with bidet seats, I assume you have already found that handheld bidets are cheap, easy to install and use. They are compatible with all types of toilets, and you can use them to wash objects such as pets and shower walls.

However, they lack many great features that an electric bidet seat can have. Electric bidets often come with a heated seat, different spray modes, a dryer, and so on. You can sit there and control everything through a remote. Seniors, people with disabilities, and those who live in a cold place will enjoy it. The downside of buying an electric bidet seat is that you have to pay a lot more.

Once you have made your mind, you can check these two articles below to find your favorite bidets.