Bidet is a great add-on in your bathroom to improve your personal hygiene. These days, more and more people want to get on this bandwagon. But it is something that can go wrong at some point. For example, some people will complain about the bad smell coming from their bidets. 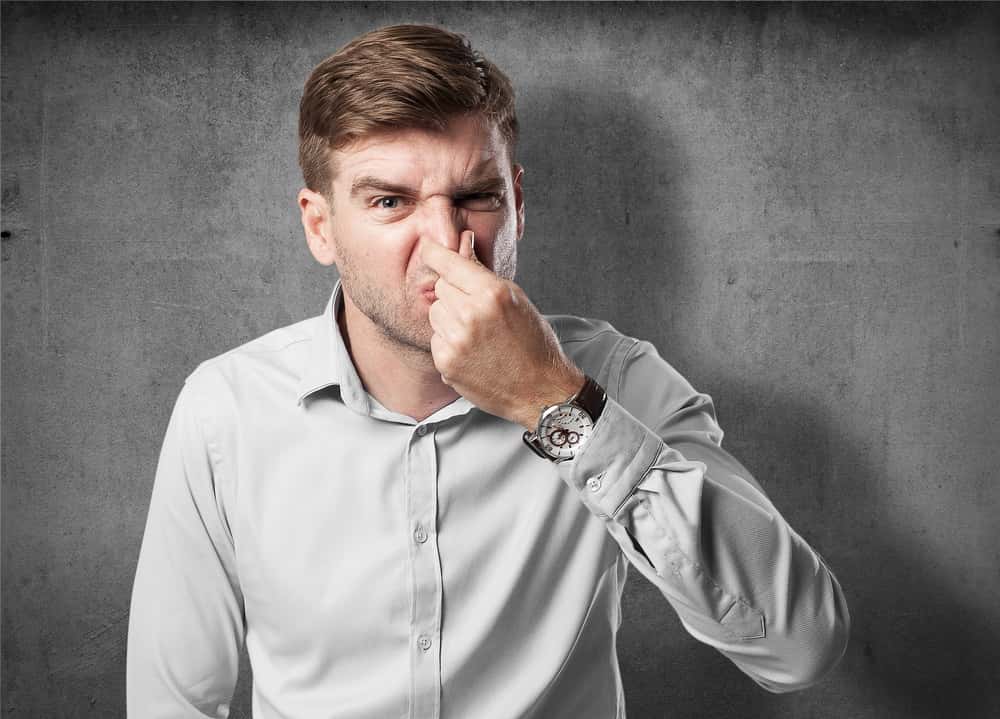 There are a few reasons for it, and the solutions are different accordingly. The clogged deodorizers are always the culprit but the urines left on the toilet, and the missing of the P trap are also the common causes.

Read on! I will explain why your bidet smell and how to get it removed correctly in the following sections. Whether you have a TOTO washlet or a standalone bidet, you will get the correct answer in this post.

Bidets with a chemical smell

Some of my friends complained about chemical smells coming out from their bidets. The models could be either a bidet attachment or a bidet seat. Usually, these complaints happen when they have just installed a new bidet.

As you know, there is a heater in the electric bidet seat. It will need to burn off the coatings when it starts to work initially, naturally producing some chemical smells.

Aside from that,  the plastic will react with the heat coming from the heater and dryer in the initial phase, causing some horrible chemical smell. This is not only happening to electric bidet seats, but also applies to warm water bidet attachments when the hot water gets into the side panel.

How to remove the chemical smell from a bidet?

I will say these smells will go away gradually. So in most cases, you don’t need to do anything but wait. The coating will be burned completely, and the plastic will not react with the heat anymore.

If the bidet continues to smell bad, its materials may be questionable. You’d better return it if it is still under warranty.

Many bathroom fixtures could release sewer gas smell, so do bidets. Sometimes, the culprit is the bidet itself, but sometimes it could be the problem with your toilets.

Usually, plumbers will install a P-trap or S-trap below the bidet. It works by creating a barrier between the sewerage system and the bidet by using a small amount of water. When the sewer gas evaporates, the water will stop it from flowing backward.

Therefore, when the P-trap or S-trap is missing or broken, your bidet will have a sewer gas odor.

The trap in the toilet can go wrong as well. As bidet seats, attachments, and handheld bidets don’t connect with the sewage system at all. If you find a sewer gas smell, it should come from the toilet.

Another reason has to do with the seal. The seal is located at the bottom of the toilet or standalone bidet to prevent smelly water from flooding the bathroom floor.

A seal usually lasts about 30 years. But it could break at some point in your life. The foul odor and the water will go out from the toilet when damaged.

How to remove sewer gas smell from a bidet

As I said, it is often related to the trap or the seal. Therefore, you will need to install a new trap or seal to remove the sewer gas smell.

Installing a new trap could be a complicated task to do. Therefore, I suggest you hire a plumber to get the job done unless you have expertise in it.

Installing a new seal seems a bit easier. You will need to turn off the water supply, loosen the bolts, remove the toilet bowl and replace it with a new one. If you don’t have any experience of it, going for a professional is a better way still.

Bidets with an unpleasant damp smell

It may originate from the deodorizer when you smell a damp and funky smell from a bidet and even all over the bathroom.

A deodorizer is useful in most electric bidets and bidet toilet combos. Instead of masking the bad smell with other smells as the air fresheners do, it filters out or breaks down the smelly molecules in the air.

However, bidet deodorizer needs cleaning and maintenance. Even though models vary, you need to clean the deodorizer every month in most cases. Otherwise, it will get clogged over time.

When it is clogged, it is not able to dissolve bad smells and will even release some unpleasant odors. The strange odor may also occur when you use a deodorizer replacement from the aftermarket. It may not be compatible with your model and weaken the effect.

How to fix a smelly bidet deodorizer

The most straightforward way to remove the odor from a deodorizer is to clean it thoroughly, and luckily it is an easy task to do.

The deodorizer is located on the side of the main unit. You need to pull the case out and pry the opening out. Then you can take out the carbon filter carefully.

To clean the dust in the filter, you could use a hair dryer. Once it is done, reverse the process and put it back.

If this method doesn’t work, it may be time to replace it with a new one. While TOTO washlet deodorizer can last for years, you have to replace the deodorizer every year or six months if you have some specific models from Brondell.

I highly recommend you get one from the manufacturer as a deodorizer from aftermarket may not work or even cause extra odors in the end.

Bidets with the urine odor

Bidets releasing urine-like smell are often electric bidet seats, and the bidet owners are often males, or the family has a male family member.

When urinating, a man’s urine can accidentally get onto the seat, the dryer, or any parts of the bidets.

Electric bidet seats come with heated seats and dryers. Therefore the urine on these parts will evaporate quickly, leaving smelly stains and waste on the seat or around the dryers. Over time, the odor could get worse and worse, making the bathroom become an unpleasant place to go.

It could happen to other types of bidets as well. Even though they don’t have heaters, the urine left on the parts can evaporate and become smelly.

How to remove the smell of urine on your bidet

The ultimate way to remove the urine smell is to clean your bidet thoroughly. The most crucial parts to take care of are the dryer and the seat.

You can use a homemade solution mixed with mild detergent and water. Soak the soft cloth into it and wring it out tightly. Then gently wipe heat, dryer, and other parts.

To clean the dryer, you need to lift the flap to protect the dryer and wipe away any residue hidden into the crevices.

For male users, it is best to remove the urine as long as you notice it.

Bidets with a burning smell

Even though it is rare, it could happen to an electric bidet seat and bidet toilet combo. Anything electrical can go wrong. If your bidets have a burning smell, there may be something wrong with the electrical components or wirings.

Bidets may have different electrical requirements. For example, when the maximum power consumption of the bidet is not compatible with the outlet, it can cause malfunction.

What to do if you notice a burning odor

The best way to deal with it is to unplug the bidet immediately and contact the manufacturer or seller. Don’t handle it personally as it could be hazardous.

It is possible that you need to send it back get some replacements. Or, you need to remodel the circuit in your bathroom, such as installing a delicate circuit for the bidet.

In this post, I illustrate different types of smells a bidet could have and how to fix them correctly.

If your bidet releases a chemical smell, it could be the normal reaction with plastic or the burning of coating on the heater coil. With time, it will disappear.

If the smell is urine-like, the reason may be that you or your family member left some urine on the bidet. It would leave stains on the seat, around the dryer, or any parts of it. Removing it is straightforward by cleaning the bidet regularly.

For those who find their bidets have sewer gas odor, you should look at the seal and trap of the toilet or the standalone bidet. Sometimes, the trap is missing, or the seal is broken. To fix it, you will need to hire a plumber.

Rarely, the bidet can have a burning smell, and it could be the problem of electrical parts and wiring. You should pull out the cord immediately and ask for help from the manufacturer.

Calm down when you find your bidet smells terrible. I hope this guide can help you out somewhat.