A Complete Guide to Bidet Towels: How to Use, Store, Wash & Make Them

Yes, you don’t need to wipe after using a bidet, but you still need something to dry you off if your bidet doesn’t come with a powerful dryer. Instead of using one or two sheets of toilet paper, you can choose a more eco-friendly option: a bidet towel. 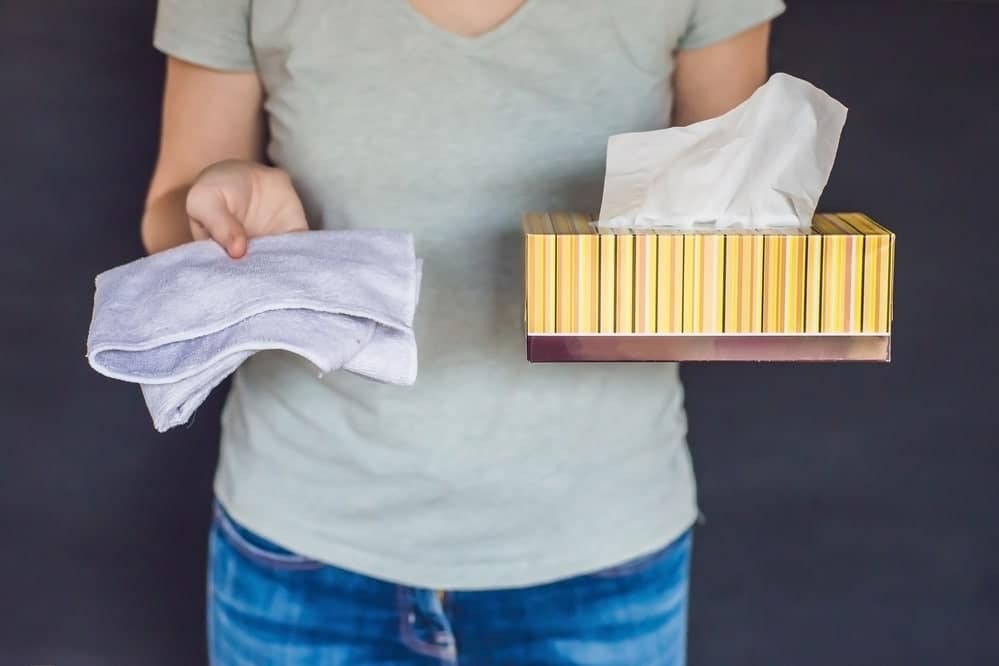 I know it may be a completely new thing to you and even seems a bit gross. Therefore I want to lay out this bidet towel guide to let you know how to use, store, wash, and make them at home. You can save more trees and water by using bidet towels in the right way.

What is a bidet towel?

A bidet towel refers to the towel you use to dry your butt after using a bidet. So the primary purpose of these towels is to absorb the moisture leaving on your nether region because other debris and dirt have been washed away by a bidet.

We often use a bamboo towel as a bidet towel as it has excellent absorbability and antibacterial ability. In addition, it is very soft to touch as long as you wash it correctly. But there is nothing wrong with using a towel made of cotton or other materials as long as it is clean and absorbent.

Another upside of using bamboo towels is that they are biodegradable to cause fewer negative effects on the environment.

How to use bidet towels

There is no big difference between using toilet paper and a bidet towel. After using a bidet, you will take a toilet towel to dab your butt. Once your butt is dry, you put the used toilet towel into the container used to collect them. So it is easy peasy, right?

As most bidet towels can’t absorb the water as quickly as toilet paper, so you have to dab your butt for a longer time to get it dried off thoroughly.

You may be curious about how frequently you should change to another clean bidet towel. Personally, I will use a new towel every time after using a bidet. It just makes me feel more secure.

Most commonly, no dirt will leave on your skin after using a bidet. However, if it happens, you need to clean the dirt leaving on your towels immediately and try to adjust the settings of your bidet again.

No, don’t do that. For everyone’s personal hygiene, each people have to have their towels. It is the same as everyone needs to use their shower towels. Towels can spread germs, and you can get infections by sharing towels.

Therefore, even though you can’t find any dirt on a bidet towel, you can’t share it with anyone else.

If you are not living alone, I advise you to prepare different towels for your family members or roommates. For example, ask each member to use a specific color or pattern of towels.

Is it safe for women to use a bidet towel?

Technically yes. Compared to men, women are susceptible to UITs and other infections, making the sanitary of bidet towels even more critical for women and girls.

As long as the towel is clean, it could be safe for women to use. You can use different towels to dab your front area and back area separately, or fold the towel and use a different quarter for your different part.

In this way, the bacterias from your anus will not go to your lady bits. So everything boils down to the cleanliness of towels. So I want to cover more on this later.

How to store bidet towels

You need to prepare two containers to store bidet towels: one is for clean ones, and the other is for used ones. I suggest you get two with different colors or patterns so you or your family members will not use the used ones accidentally. I also prefer the container with a lid because it can prevent any dirt get onto the towel when flushing the toilet.

If you intend to use a towel a few times a day, I think a hook is a must-have to let it air dry. If others share the bathroom, you need to prepare extra hooks for them. For guests, I think toilet paper would be a better choice because not everyone can accept a bidet towel, and they don’t know which one is for them to use.

After using the bidet towel, you can hang it on the container’s rim and move it in the container the next time you use the bidet. The reason why you should do this is to avoid any awkward smell due to the wet towel.

I suggest you prepare five or six towels for each user so that you always have enough clean towels to use.

How to wash bidet towels

Washing a bidet towel is not complicated.

If the towel is made with bamboo, you should follow the bamboo towel care instructions. Put the bidet towel in the washing machine and wash them in warm water with mild detergent.

Please don’t use any softener since it will decrease the absorbency, vital for dabbing the water quicker. Then you can tumble dry them with on medium heat.

For cotton bidet towels, you should wash them in warm water with a small amount of detergent and nonchlorine bleach if they are white. For colored cotton towels, cold water with detergent and a color-safe bleach is a better solution.

If your towel is made with other fabrics, you should check the instructions online or ask the seller.

I also think using laundry sanitizer from time to time is good for maintaining bidet towels and our hygiene.

You don’t need to get something called a “bidet towel” to use it as a bidet drying towel. In fact, any towel or fabric that is comfortable, soft, and has good absorbency is a good fit. The price of the same product varies based on different marketing purposes.

You could cut the big towel into a small piece or make use of your old clothes such as pajamas. One thing worth mentioning is that you should make sure the material is safe to use in your sensitive area.

The proper size of a bidet towel is about 25cm x 25cm. However, it is still up to you.

Once you cut the material into small pieces. You will need to secure the edges using a sewing machine or sewing kit. This allows the towel to staying longer.

After washing it, you can start your homemade bidet towels and save a bunch of money.

Another towel often associated with “toileting” is the family towel. The family towel is used as a replacement for toilet paper. It means you will use it after using the toilet instead of using a bidet.

As you know, there are no residues on the skin, so the bidet towel is always clean. However, a family towel is used to remove these residues and will become dirty after each use. Even though some only use the family towel for number one, it still will leave more contents on the towel.

I shared all the information I knew about bidet towels in this post. As a more eco-friendly choice, bidet towels are being accepted by more and more people. It offers you a way to ditch the toilet paper forever.

Using a bidet towel is not gross as long as you know how to use, store, wash it. It may take you more time to deal with it than throwing the toilet paper right away. But you could save more money, trees, and water.